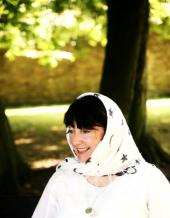 London born but living in the Black Country since 1997. Married to Geoff, we have a whippet called Jack. Spiritual beliefs are pagan, tending towards Druidry but with an appreciation of Christianity. Father Welsh, mother was Scottish/Londoner with a drop of Dutch blood. Came to Wednesfield in January 2009 and would like to meet local people with a view to companionship and friendship as my friends are scattered throughout the UK and overseas. Favouritre places: Glastonbury, Avebury, the North Cornish coast and Bodmin, Haworth and the Yorkshire Moors, North Wales. More locally: Kinver Edge, much of Shropshire.

Writing and performing music (but not for some time), listening to music. Tastes wide and varied: Vaughan Williams to Frank Zappa. Particular favourites are Kate Bush, Judie Tzuke, Joni Mitchell, Nick Drake, Marillion, Happy Rhodes, Tom Paxton. Reading: everything from biographies to fiction with a particular interest in the works of Phil Rickman, Mark Billingham and Ruth Rendell. I appreciate art and miss the galleries and museums of London which I rather took for granted when I lived in the capital. Very keen on films, particularly those with a supernatural theme (but not gore fests!), period films such as 'Rebecca', 'Brief Encounter', 'The League of Gentlemen', 'Went The Day Well' etc. Keen on comedy, my favourites include The League of Gentlemen, The Royle Family, Father Ted. Was very sporty in my younger days, still enjoy walking and would like to get out more in company of others who like to walk or hike. Have been seeking (unsuccessfully) an exercise buddy for some time but so far without success. Is anyone out there keen? Very keen on the works of M R James and enjoy the TV adaptations such as 'Whistle And I'll Come To You', 'Lost Hearts' etc made mostly by the BBC. Have an ailing allotment due to the fact that it takes more than a bit of weekend work to keep them going! TV: I enjoy shows such as 'Have I Got News For You', 'QI', 'Mock The Week' and 'Never Mind The Buzzcocks'; history shows and 'Time Team'; programmes about spirituality, the British countryside. Actively avoid reality shows and soap operas and most shows aimed at women as I'm not the sort of woman they appeal to. Not into pub culture but no objection to the very occasional visit to a quiet real ale or country pub.