Originally Posted by Cache ->
Thanks for tips. I just badly sprained both ankles, both feet turned under themselves and backwards the wrong way, so I have a lot of soft tissue damage, but nothing broken. I have to walk a bit, but it's regressed the damage when I've walked too much. I might get an athletic sock to help support it.
I've only just joined, so would he very uncomfortable posting a daily exercise routine.
I think my best option is the gym, but I would have to travel which is still limited for my feet. Maybe I should look up some gym style exercises on the net, which do not require equipment. I have some dumbbells somewhere, which were rarely used.
My wife has metal plates in her right foot and has arthritis too but she has one of these, which does get her some exercise. They do range in price though. 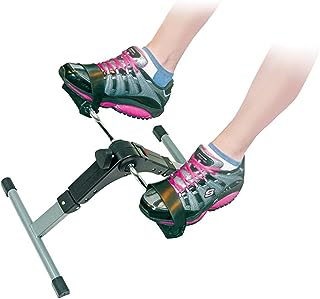 Other than that it's a good pair of boots of plenty of support for the ankles and cushion soles.

Originally Posted by Floydy ->
Do you believe in this philosophy?

Looking back, do you think you could have changed your ideas towards looking or feeling good or otherwise being more intelligent in life? In other words, did you accomplish your goals within the scope of physical fitness or did you find that being of reasonable intelligence was enough to get you through?

Being happy with your general fitness obviously improves your wellbeing to the extent that a healthy mind is therefore created.

In my particular case, I have worked hard to maintain a healthy physique because that enables me to sustain my fitness. Building muscle helps retain the joints, ligaments and bones. If those areas are kept in good condition than we are less prone to developing injuries when we are older.
In turn, that makes us happier and free to enjoy a healthy lifestyle, i.e our general happiness is retained and we can function without too much fear of becoming dependant on others.

There are people who look at those who exercise (perhaps too much in their eyes) as freaks of nature. True, some take it to the extreme but most people, like myself, do it to keep in optimum health and are certainly not vain or boastful. Those who say we are just proves their ignorance of the subject.

Those who shun physical exercise are basically ignorant and have little self-respect. They do not forward-think. There are very ignorant people around who do not understand physical fitness. You do not need to go too far as, for instance, some bodybuilders go to get themselves fit. You just need the willpower and determination to look after yourself. We only have one life and having a bad diet such as endless starchy bread will kill us all off very quickly indeed! The best way to postpone the ageing process is to eat healthily and exercise regularly. Any idiot knows that and it doesn't take any kind of know-it-all, misguided, internet-bashing egghead to drum it down our throats lol! And there's certainly no vanity attached to wanting to improve our own lifestyles is there?!

Are you the sort who relishes a long life and have strived to maintain your years through regular exercise or have you succumbed to laziness, therefore hoping for the best?
Well intelligence wise I achieved a degree and worked teaching children with multiple disabilities and language disorders. I was active when young and slim. good weight, hiked, cycled, rollar-skated!

You can't predict every aspect of life though and despite previously having had the fitness to complete the 3 peaks challenge and john o'groats to Lands End, I ended up in a wheelchair in my mid 30's after been struck down out of the blue with an extremely rare neurological disorder.

Absolutely hating been stuck in an hospital bed having everything done for me I made it my mission to get back my independence.

The goalposts have moved slightly (ie my definition of what independence is now, compared with what it was when I was young,fit and active) as your life priorities and what's important to you changes significantly after a life changing event.

Now I just want to be here for my dog's life (our previous family pets lived to 16-17 so that's another 10 years I've got to keep going for!).

If within those 10 years I manage to improve my mobility even further and increase my chances of living longer that would be a bonus but you never know what life is going to throw your way for you to get through! ..I'll try my best!

I think though Mental Health and an intelligent mind can make a huge difference to a situation.

I have heard of people who don't have severe physical disabilities but have depression and they have ended their life or just stopped looking after themselves which also resulted in their death. (ie stopping taking medicines such as insulin)

At the other extreme are people who have faced extreme isolation (people captured by rebels and imprisoned in isolation) or severe abuse (the woman who was made to live in a box under someone's bed) and their minds are what saved them, because they were able to use them in such a way to create fantasy worlds (pretend they were somewhere else/plan escape/ catalogue how many words they knew in the languages they spoke) to keep their minds active until they could get out/be rescued.

Yet people who had previously been very physically active may 'give up' mentally more quickly when they physical prowess is diminished by an unexpected event (more likely to fall into depression and attempt suicide). Just look at how high the attempted suicide rates are amongst ex-soldiers/marines who have come home injured (and with PTSD) after they were probably the fittest physically they had ever been in their life. (and they often get specialised training to cope with extreme situations too that most regular citizens don't get access to)

So I think Mental Health (and depending what condition it is too) can make a huge difference to how you cope with what life throws at you.

So I think Mental Health (and depending what condition it is too) can make a huge difference to how you cope with what life throws at you.
It is also reckoned that people with mental health issues, such as depression and anxiety, are much improved with physical exercise and keeping themselves fit. Apparently it's all to do with the endorphins that are released with physical exercise and their positive effect on the mind.

When I was working I used to get home, get changed and whatever the weather head off down the field for a brisk walk and I could feel the days troubles slipping away .

When I was working I used to get home, get changed and whatever the weather head off down the field for a brisk walk and I could feel the days troubles slipping away .

I have a close family member who gains by exercise in this way. Many people simply feel better for a walk in the sunshine, both of which have a positive effect on the mind and the release of endorphins. Sunshine has a positive effect on a particular part of the brain hence those 'light boxes' for helping with the SAD syndrome people suffer from. It's reckoned we don't get enough sunshine regularly for the 30 minutes daily of sunshine required that keeps problems like Seasonal Affective Disorder (SAD) at bay.

I often also wonder about how much of the current increase in mental health problems could be down to less exercise for many people these days. Sitting in front of TVs, computers and mobile phones dramatically reduces the amount of exercise people used to get in the past.

True, I get that too but my point was like the case of the woman who lived in the box, she wasn't allowed to exercise, she was locked in it 23 hrs a day, her only chance of survival was to compartmentalise what was happening to her in her mind and create a fantasy world that was elsewhere (pretending she was with family she loved etc).

People like Stephen Hawking, he may not have been physically 'locked in a box' but in a way his body was his prison as one muscle was all he had control of to use a special button to select letters on a computer.

It must have taken him forever to write anything, even a sentence but yet he wrote books and used his incredible knowledge to further every one else's (well brainy scientist-student-type people!) understanding of the universe and Quantum physics.

So even without the ability to exercise to relieve MH issues the intelligent mind can be extremely resourceful in finding a way to survive.

If physical ability is all a body has and that goes, what happens to that mind? ..the one that can't get lost in fantasy to imagine how they could get it back, or other solutions if 'getting back that level of ability' was not possible (as in SH case I don't think any amount of weight lifting would have prevented the ALS progressing, even if you'd strapped the weights to him and moved his body for him!)

The fact that his career choice was not something that depended on whether he could run 10 miles or lift anything was what enabled him to survive it mentally.

If physical ability is all a body has and that goes, what happens to that mind?
It's reckoned to be the mind which controls the physical body, all we do with our bodies and even down to all our varying emotions comes via instructions from our minds. A healthy mind is equally as important as a healthy body. I have no idea how people such as Stephen Hawking managed with his obvious physical disability but his mind was far from inactive. Perhaps that's the clue to how important our mental health is in just keeping going in whatever we are able to achieve.

Millions people who meditate do not do physical exercises
They believe meditation will prolong life and alleviate stress.

They are usually very slim as well.

If they do any exercise ,Yoga is there preference.

Good to see this thread resurrected by Susan68 and see that she has the determination to maintain her health and fitness where possible. Well done to you Susan and others who have written new replies