I have never held physical items in very high regard. I have mementoes, such as a brass Venetian Lion, about 5 centimetres tall, with wings, given to me by my paternal grandmother when I left her for the last time as we sailed for New Zealand in 1953. I have the tastavin, neatly framed and hanging on my office wall, presented to me in 1982 for the champion wine at the National Wine Show and various certificates for lesser awards but most of my precious things are memories. Most in the form of photos, some in the form of letters relating to the places where I have visited, lived and often worked . I have letters written by my mother to my father as he sailed the world with the Royal Navy during and after the second World War and his returning letters sent from strange sounding places. My mother kept these keepsakes, for which I am eternally grateful as I muse through them from time to time and am transported for a moment to those years. Other than these fragile items there is just one physical thing that has captivated me for years, it sits on my bedside table in its bowl which I turned for it, from Swamp Totara about 10 years ago. It needs the following descriptor to mean anything to anyone other than myself and this I will pass on to my children in due course . I named it The Communicator.
The Communicator was born high in the Southern Alps of New Zealand near Mt Whitcome. Alternating high and low temperatures cracked off a lump of quartz the size of a mans head, which tumbled down the steep terrain to splash into the icy waters of the Rakaia River. A thousand years of tumbling, rolling, sometimes freely, sometimes stuck between bigger boulders for a year or ten, ground off the rough edges and polished the stone to the size of a gooses egg. After Lake Coleridge the gradient shallowed and the stone moved slowly and daily down to the sea. For years it rolled up and down the beach with the surf, slowly moving north until it reached Birdlings Flat.
In the summer of 1954, John Bennett, First Lieutenant of HMNZS Tui, went ashore from Tui, which was berthed in Lyttelton Harbour, and a friend took him out for the day, arriving at Birdlings Flat in the late afternoon. John walked the beach, missing his wife and son far away in Auckland. He picked up a pebble here, a shell there looking for a memento to take home to them when the time came. Then he saw what he at first thought was a gannets egg. It was large, off white and shiny. He bent down to pick it up and was surprised by its weight. It felt heavy in his pocket so he held it in his hand all the way back to his ship. In the weeks that followed, while Tui was away from Auckland, it was never far from his hand and on his return to his family he gave it into the keeping of his wife , Lilian. In 1957, John left the navy and worked in a lay capacity for the Anglican Church first in Auckland then in Hawkes Bay where he became the Archbishop of New Zealands right hand layman.
In 1970, after a long illness, John died and after he had gone Lilian often would hold the stone and be at one with John for a while. For twelve years Lilian survived without her beloved John but became increasingly saddened and unhappy. In 1982 Lilian died suddenly of nothing in particular and the Communicator passed to Michael, the son. And he, too, would hold it and think of his father and his mother. Not many days passed that he didnt. Michael named the stone The Communicator knowing that it was a link to the past, and would last longer than any family. ! 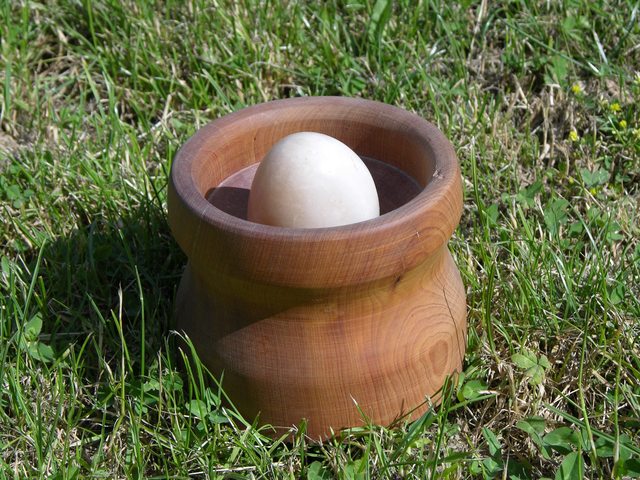 What an interesting and beautiful story, Ciderman. Thank you.

A lovely post Ciderman, most interesting and a very enjoyable read.

Fabulous, right down to the description of how the egg formed.

I hope it stays in the family forever, with the story going right along with it.

I like the thought of being able to hold a piece of history and connecting with loved ones. Its heart warming and speaks of the good in people who feel that way.

My thanks for sharing this.

Thank you for your comments. I am glad that I am not the only one with an imagination.