Originally Posted by Last Tango ->
According to a recent press item, it seems the queen likes to partake of the occasional Fray Bentos tinned pie during a flight.

Given the scare mongering re food shortages after Brexit, I find myself wondering if I should perhaps stock up on some tinned/packet groceries.

What, if any, store cupboard items can you suggest?
I don't mind a decent steak pie but the tinned Fray Bentos variety are not to my taste. You even have a problem getting the lid off.

Originally Posted by Floydy ->
Absolutely.
Why the panic anyway? Does the OP know something we don't?
The latest scaremongering article -

THE Operation Yellowhammer no-deal contingency plan will affect Britons differently according to their referendum vote. Heres how:

Food shortages:
Remainers will struggle to obtain their pampered elite staples like quinoa, sourdough, and milk. Brexiters can continue to enjoy honest staples like Fray Bentos pies, tins of all-day breakfast and Ben Shaws cherryade without fear of rationing. 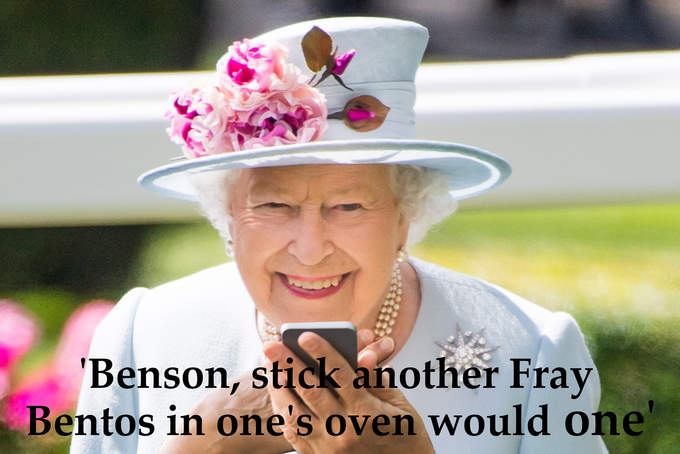 I have always got at least 12 cans of Tuna in Springwater for Coco in case there is a shortage, being that is all she eats.

I also have Tin Red Salmon for myself.

What a load of old cobblers!
I can guarantee if you nip down to your local farm shop or supermarket there will be loads of nourishing food available. If there are shortages it we be quite fun to try something different.....Only fussy eaters will struggle....

Originally Posted by OldGreyFox ->
What a load of old cobblers!
I can guarantee if you nip down to your local farm shop or supermarket there will be loads of nourishing food available. If there are shortages it we be quite fun to try something different.....Only fussy eaters will struggle....
escargot, sauerkraut, bockwurst,

I used to have their minced beef and onion pies. Cut off the lid, stick it in the oven then watch the top go nice and crisp but then see the horror that awaits, soggy everywhere else. The meat tasted good, i wouldn't have had them otherwise but no matter how long i left the pie in the oven, the base and side were always soggy. The only time the base and sides cooked as they should do with a pie is when i over cooked it and the top was burnt to a crisp and the meat was burnt also. Then for some reason the supermarkets where i lived stopped selling them and I've not eaten one again for approx 15 years.

As for the stock issue coming from the usual 'Project Fear' suspects, Those who control the food distribution chain will not allow stock to be an issue because they know full well what will happen. Control's at the border will be increased which will of course cause a delay BUT whichever food distributor gets their produce to the stores first will be the one the public will be flocking too to get their goods. Do you honestly think that the big 3, Asda, Tesco and Sainsbury are going to allow either one of them to get stock in before they do, knowing they could potentially lose millions in a few days just because the public went to a competitor that got the stock in first, no of course they wont.

I can live on simple things like eggs , baked beans on toast , baked potatoes , soup , and take a multivitamin if necessary .