As long as you take care of yourself youll be grand Fruitcake.

Roll on Spring and I can all at least get out to the garden when the weather is a bit warmer, its been freezing here the last few days.

By the way there was a fella I knew on a local forum here in Dublin, he was money mad, spoke little of anything else, his forum tag was Dough-nut, all I need now to complete a trio is a lady called Jammy Tart, or an E. Clare, then we can all have a high tea on a low table.

I heard that old tearjerker of a song on the radio last Christmas day, The Little Boy That Santa Claus Forgot and it reminded me of a young German boy called Klaus De Vobia.

Born in 1919 to a drunken waster of a father and a heroin addicted mother he weighed only 3 lbs at birth, he spent the first six months of his life in an incubator resulting in him being terrified of enclosed places for the rest of his life.

There was no love for this poor unfortunate child and he was beaten with a knotty Hawthorne cane almost every day of his early childhood, he was half starved, as the old ones say here Theres more flesh on a tinkers stick after a row than there was on young Klaus.

When he was 12 years old his mother set him to work with her, she was a casual chambermaid in an old hotel in Hamburg and she forced young Klaus to operate the dumb waiter from the inside, I neednt tell you the poor boy was a nervous wreak after two years in the job.

His one and only love was painting pictures of open meadows and ships afloat oceans of blue green seas.

During the early days of the war Hitler got to hear of his art and sought him out, he sheltered and sponsored him, however Hitler had one of his flashes of madness one day and wanted to go pot holing taking Klaus with him to take live sketches, Klaus steadfastly refused and was jailed for the rest of the war in solitary confinement, imagine having Klaus De Vobia in solitary confinement?.

Not being able to paint any more he hanged himself just 10 minutes before the prison was liberated by the allies.

And they talk about the little boy that Santa Claus forgot!, tut tut, shame on them, ner a song nor a word about poor Klaus De Vobia.

I cannot fault our NHS, and I follow the instructions given to me by the heart failure team who have looked after me since I was diagnosed.

I never liked like running just for the sake of it. Chasing a round or oval ball was fine though, or cycling, or swimming.

My dicky ticker prevents me from doing most of that, and my knees won't allow me to ride a bike, but I do enjoy walking.
I have found lanes and fields and buildings of interest and shops and parks and views of the Atlantic and people I never knew existed until I took up walking for exercise five years ago. I have a nice pocket camera that was my companion before lockdown, and I have taken pictures of things I have never come across before.

Other than visits to a hardware shop I have not been out the house for anything other than medical appointments since the middle of March last year.
Thankfully I have a treadmill so do my walking indoors now. 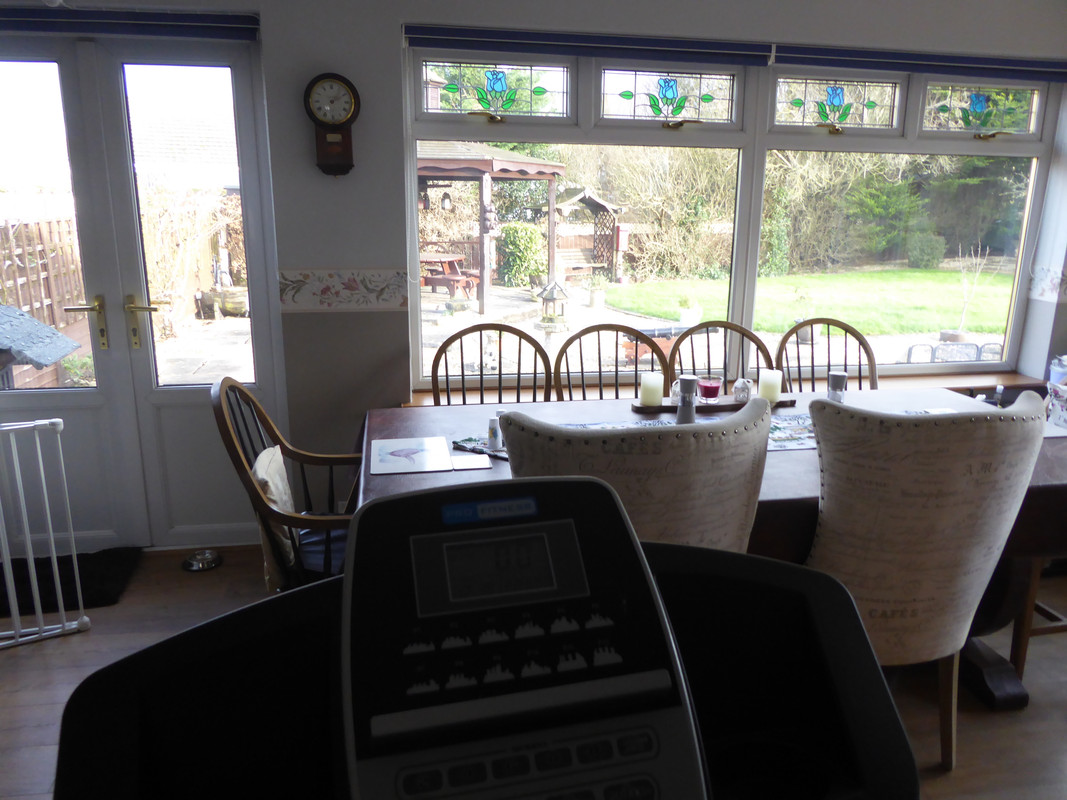 I have also learned to read ... a book one handed whilst walking.

Oh what a terribly sad story.

There is so much cruelty and sadness in the world, and it doesn't seem to be getting much better.

I agree, far too much hate in the world today.
Peace of mind and contentment are King as far as Im concerned, hate and stress are killers.

Its true that you cant beat walking for exercise Fruity, my dad was proof of that, he walked everywhere, said the bus made him feel sick and he only used it when the journey was long and couldnt be avoided, he was as fit as a fiddle for a man of his age and lived to be 94, im positive hed have made it to the 100 mark or more if he had not gone into hospital for a series of tests, he contacted that deadly hospital bug in there and that was that, God rest him.

Its great to see you are always in good form when you are on here, its a pleasure to read your posts.

Beautiful view of the garden there, love the rustic parts, you have it looking great, long may you enjoy it.

I hate politics but I have to say a final few words on the outgoing president of the USA.

I love the new way the media say something that cant be traced for verification.

A source familiar with the White House told our reporter

Who do they think theyre kidding? its just an excuse for making it up, I make things up but everyone knows that already, no need for an excuse.

There are hundreds of thousands of people familiar with the White House all through the years, and the tourists come by the millions, its a world renowned landmark for Gods sake, everyone is familiar with the White House in some way or other, even my dog Rocky2 was able to paw it out to me when I showed him a map of Washington DC.
But if you want to narrow it down, the source could be anyone from the vice president down to one of the lads/lassies who cut the grass.

I noticed a lot of the women involved in the White House storming were dyed blondes, no need to bother rounding them up as they have already been imbleached.
Oh God!, eeze terrible.

I worked with a Spanish chap, every time I told one of my lousy jokes thats what he used to say, wise old geezer that he was.

Donalds wife Melania has that long straight dyed hair too, split ends by the million, I remember a time when women were terrified of split ends', I think they came out with a shampoo that claimed to prevent it.
Himself uses that fake orange tan.

A source familiar with the White House said.

The president and the first lady take their appearance very seriously, they also take covit 19 seriously and adopt every precaution, when she goes to the hairdressers to be bleached, he goes to the garage to be sprayed

Yes, but I noticed they often miss the white bits around his ears.

Goodbye Mr. Trump, and thanks for all the laughs.

Folks in general have a short attention span, and, mavericks aren't tolerated for long by the mainstream, I am fortunate to have communicated with maybe half a dozen real life Jems.

[QUOTE=spitfire: I am fortunate to have communicated with maybe half a dozen real life Jems.[/QUOTE]

You mean UNfortunate to have communicated with them Spitty.

My oul lamps are getting worse.

Reading some of the thread headlines tonight I misread most of them at first glance.

Do you have a coloured bathroom suit? (no, but I have a red arse when get out of the shower, does that count?)

Is any post better than a lamppost? (Ill have to ask me dog that one)

Interesting fake on Trumps parchment (always knew he was a crook)

I think Ill have to go into the displays and change to a bigger screen showing.

I have mentioned before that Brenda Lee is my all time favourite female singer, well I came across this little gem of a video of her as an 8 year old child on youtube, no wonder she was nicknamed Little Miss Dynamite, she was dynamite from the word go, bless her.