The book is available on Amazon - not very expensive - and is a fascinating read!

Ciderman, yes indeed they still allow people to go deep inside The Great Pyramid. But, you need to buy a special ticket, costs about 100 Egyptian pounds. (about $6.40 USD)
As I said before, I wish that Bob Brier's book, was published before I toured The Great Pyramid. It would have helped me to understand so much more.

I've watched dozens of documentaries on Egypt, all fascinating .....

Incedibly, it seems that the more thet archaeologists look the more that they find .....

Recently, I've been watching a seried on the Smithsonian Channel called "Tomb Hunters" - it details, among others, these recent discoveries at Saqqara, which is probably best known for the Stepped Pyramid of Djoser: 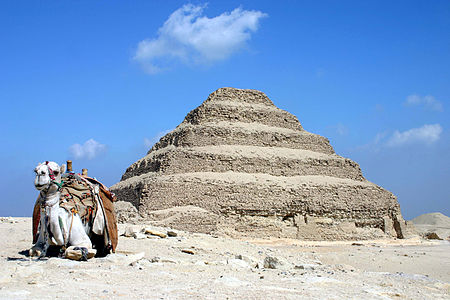 On 3 October 2020, Khalid el-Anany, Egypt's tourism and antiquities minister announced the discovery of at least 59 sealed sarcophagi with mummies more than 2,600 years old. Archaeologists also revealed the 20 statues of Ptah-Soker and a carved 35-centimeter tall bronze statue of god Nefertem.

On 19 October 2020, the Ministry of Tourism and Antiquities announced the discovery of more than 2,500 years of colorful, sealed sarcophagi. The archaeological team unearthed gilded, wooden statues and more than 80 coffins.

In November 2020, archaeologists unearthed more than 100 delicately painted wooden coffins and 40 funeral statues. The sealed, wooden coffins, some containing mummies, date as far back as 2,500 years. Other artifacts discovered include funeral masks, canopic jars and amulets. According to Khaled el-Anany, tourism and antiquities minister, the items date back to the Ptolemaic dynasty. One of the coffins was opened and a mummy was scanned with an X-ray, determining it was most likely a man about the age of 40. Another burial site 2100 BC was found a whole family was buried considered to be a rich person's found by his weak bone structure, death determined to be malaria.
No pharaohs or pyramids in the series but an incredible number of "middle-class" tombs, sarcophagi, coffins and mummies, many in a pristine state of preservation .....

Yes, with every dug up tomb, we gather an ever increasing knowledge. I watched another Netflix piece recently and they uncovered a vast storehouse of information about a middle class ancient Egyptian, his wife and their 2 infant children who were buried with him.

Most people do not know that there are well over 100 pyramids in Egypt. However, none as great as those on the Giza Plateau.
2 large pyramids at Dahsur. The Red Pyramid and the Bent Pyramid. Only a few minutes drive from the "step pyramid"