Originally Posted by Puddle Duck ->
Not only but also, Corbyn's plan to delay Brexit for a further 3 months will cost the British Taxpayer a further £3 billion !
3 bilion for 3 months extra membership. Didn't boris tell you it is only 350 milion a month? Forgotten or didn't you believe him?

Solasch, I very rarely agree with your comments, but I thank you for supplying the information....

Originally Posted by Solasch ->
3 bilion for 3 months extra membership. Didn't boris tell you it is only 350 milion a month? Forgotten or didn't you believe him?

No, it's 350 million a week. Surprised your internet research didn't tell you that.


The much misquoted bus 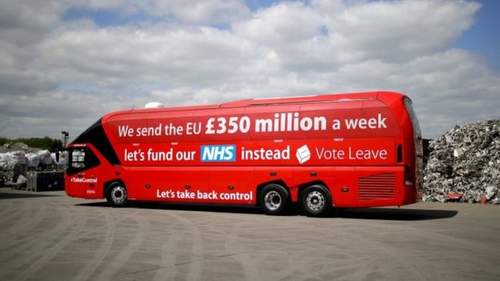 Bob I have posted before about the money spent to run the huge bureaucratic machine that is the EU and it is one of the reasons I voted to leave.

Originally Posted by Puddle Duck ->
Solasch , you have a huge amount of information at your little fingertips every time . Amazing how you know all of this stuff ! Can I ask if you are being paid for this work you do on OFF ? One of the EU Officials or one of the unelected Brussels mob maybe ? I think so..
I have posed the same question to Solly a couple of times
allready PD, needless to say nothing was forthcoming
except sarcastic remarks and more eurowaffle!

Originally Posted by Meg ->
Bob I have posted before about the money spent to run the huge bureaucratic machine that is the EU and it is one of the reasons I voted to leave.
Same here Meg, one of my reasons too. Daughter (who also supports Brexit) though I might like to read the article and I thought it would be worth posting it on the forum.
She certainly is a chip of the old block....

I think some of them start out with all good intentions Pathfinder, but they seem to change, or be 'Got At' once they arrive down in the smoke...
Everybody has a price....

It just confirms what l allready knew OGF but it was nice to
see it in print, and like ray cathode l have given up reading
Solachs posts!
Meantime the law making and breaking goes on in POSHOC
Maybe Macron and Merkels statements recently will resolve
all that crap for us? But l would not bet on it as exit date
approaches!!!

I'm always curious why remainers don't want us to spend our own money on our own projects, it seems a bit like handing your neighbour your pay packet and trusting them to spend it on things that benefit you.

What does this expensive club actually do for me a normal person in UK ?
Let's see, they have flooded my occupation with cheaper workers so my wages are lower and have hardly moved up in years, flooded my husbands occupation with young workers willing to work for less so his wages have not risen in over 10 years now.
Our local primary has had to pay for a translator as the number of none English speakers has risen so high.
Local GP surgery has recently admitted the main reason we can't get appointments is the translation services cost the same as 2 doctors !
Yes we have a couple of buildings (ugly things) supplied by money from EU oh hang on that's money we sent them originally not EU money at all.
They talk a good talk about standing up for the repressed and then I see victims being treated badly as the criminals have more rights than they do ! I also see them accepting terribly racist homophobic countries into the club with no one saying they must change their ways to be part of it.