From October there will be a ban on climbing Uluru .
( Ayres Rock)
The elders of the aboriginal tribes who own the park have decreed thwt it is inappropriate .

We visited Uluru some years ago and respected the request not to climb the rock .

It is their hereditary land after all.

Tourism can be a mixed blessing! We are finding this here in NZ. It's nice to know that visitors enjoy their time but sheer weight of numbers can ruin it.

Uluru is a sacred site to first nations people. It always has been. Tourists are like everybody else. Some of them are respectful and others are not. I think it's about time climbing was banned. Anyway Uluru is best viewed from afar.

Venice, Everest, Reykjavik and Santorini (pictured below) are among many other "destinations" which are similarly swamped:


Santorini is a beautiful island off the coast of Greece, although it's often packed with tourists during the summer.

In fact, due to the seasonal influx of tourists, the island imposed a cap on visitors from cruise ships to 8,000 per day. A whopping 790,000 people from 636 cruise ships visited Santorini in 2015, according to Conde Nast Traveler, while the entire island only has a population of just over 15,000.
Many "locals" are making a stand against mass tourism and the destruction that it leaves in its' wake. I'm delighted to read that the "locals" of Uluru are making a stand, too ..... 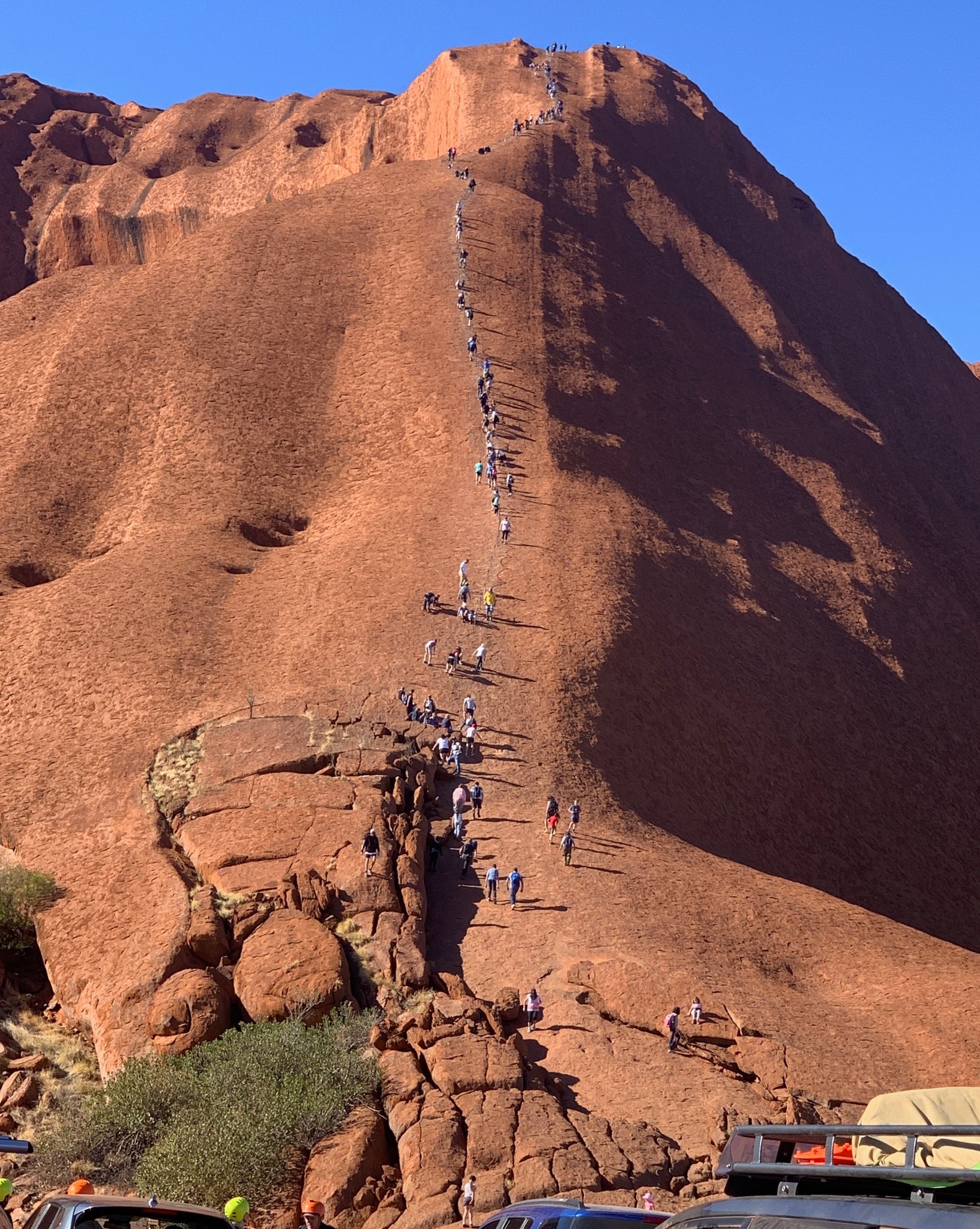 Traditional landowners are devastated by the masses rushing to climb Uluru before the cut-off date despite it long being common knowledge the act is deeply offensive.

It makes me sick looking at this photo at the disrespect and disregard shown for the traditional owners wishes, said a spokesperson from the Darug Custodian Aboriginal Corporation.

Not only do people climb it but they defecate, urinate and discard nappies and rubbish on it.

I for one cannot wait for the climb to be permanently closed and our sacred lore, culture and traditions to be acknowledged and respected.

The day we were there it had rained and there were waterfalls cascading down the side.So we walked around it.The view from the top is supposed to be spectacular but if you want that ,they do balloon trips.

Such a shame beautiful places are being abused and damaged by shear weight of numbers and the disrespectful.

Perhaps Uluru could only be climbed in small numbers and accompanied with a guide. Perhaps even someone from the indigenous people and make money at the same time...

Originally Posted by OldGreyFox ->
Such a shame beautiful places are being abused and damaged by shear weight of numbers and the disrespectful.

Perhaps Uluru could only be climbed in small numbers and accompanied with a guide. Perhaps even someone from the indigenous people and make money at the same time...
It seems that climbing Uluru is to be banned for all tourists but other activities are available:


Climbing the world-famous rock has long been considered disrespectful to the traditional owners and while it was technically legal, the Anangu people would politely ask people not to climb as it follows a sacred ceremonial path used in indigenous ceremony.

The climb has also damaged the rock itself, with a huge white scar from tourists walking the same path being visible from a distance.

A 12-person board voted unanimously to close the rock on a very symbolic date  the 34-year anniversary of the day the Uluru land title was handed back to the Anangu people.

Chairman and senior traditional owner Sammy Wilson made an impassioned speech prior to the vote, explaining the sacred nature of the site.

It is an extremely important place, not a playground or theme park like Disneyland, he said. If I travel to another country and there is a sacred site, an area of restricted access, I dont enter or climb it, I respect it. It is the same here for Anangu. We welcome tourists here. We are not stopping tourism, just this activity.

Despite closing the climb, there is still plenty for tourists to enjoy in the region.

Activities at the Red Centre include camel rides, the Uluru Segway tour which takes visitors around the base of Uluru, a number of walking tracks including the Valley of the Winds at Kata Tjuta (the Olgas), Mala walk, outback cycling rides, Uluru motorcycle rides and even skydiving, a spokesperson for Tourism NT told news.com.au. Maruku Arts offers art, tours and workshops, and of course there are many sunrise/ sunset tours on offer.

The main thing is not to spend too long there .
It’s basically a big rock in the middle of nowhere
As Oscar Wilde said worth seeing but not worth going to see

Unfortunately some people think that 'Nobody' owns the world or any part thereof.......
It makes me think of the great Kinder Trespass.....

The mass trespass of Kinder Scout, also called the Kinder mass trespass,[1] was an act of wilful trespass by ramblers and members of the Young Communist League. It was undertaken at Kinder Scout, in the Peak District of Derbyshire, England, on the 24th of April 1932, to highlight the fact that walkers in England and Wales were denied access to areas of open country. Political and conservation activist Benny Rothman of the Young Communist League of Manchester was one of the leaders of the mass trespass.[2]