The Venetians trying to reclaim Venice

Some facts from the video:

Giant cruise ships dwarf the buildings and disgorge thousands of day-trippers by the hour - 1,500,000 last year
I visited Venice in 1964 (on a school trip) and I remember how few tourists there were, compared to Cattolica, where we were based - there were certainly no cruise ships but there were neighbourhood cafes and shops - everywhere was a bit grubby and "lived-in".

For that reason, I watched "Venice 24/7", about the emergency services, on BBC iPlayer this week:

The program bore out the video details - the residents are mostly elderly, in ancient and decaying houses, overwhelmed by tourists, pushing up prices and falling, drunk, into the canals .....

The city of Venice, which is only about 3 miles by 2 miles in size, is unique, and I hope that measures to control the "traffic" are introduced .....

I first went to visit Venice in about '79 and again in the 90's. It was so busy the second time that it was hardly worth going. Plus the Italians love to rip us off with their over-inflated restaurant prices. Venice is a lovely and interesting place but I wouldn't bother going back.
ruthio
Chatterbox

I've never had the slightest inclination to visit Venice.
Even less so now.

Originally Posted by ruthio ->
I've never had the slightest inclination to visit Venice.
Even less so now.
One of the worst pizzas I have ever had was bought in Venice.

I understood that Venice was going to stop cruise liners from berthing. Apparently there can be a couple at one time. That's probably 6/7000 people invading . That must drive the natives mad . Obviously erosion must be happening more quickly.
Ideal for water ski-ing (maybe) !

I went there ( again) last year and it was the worst day of our holiday ( To Croatia, we got a ferry across !)

Rammed to the gunnels with hordes upon swarms upon an infestation of humanity.

Not a pleasant experience.
It was busy when I last visited 30 years ago but nothing like it is today........And the size of those cruise ships

I have to make some comment in this thread.

I visit Venice every year on a 17 to 19 day cruise and have done for the past 10 years.

I am currently on such a cruise and was in Venice YESTERDAY !

So some facts are in order

Firstly, Venice is a stunningly beautiful city, the very "Pearl" of the Adriatic. It is unlike anywhere else in the world and it won't be there forever because it will eventually sink beneath the water. Now is the time to go and see this unique and stunning place.

Here is a picture of the Grand Canal with the gorgeous buildings and hustle and bustle of water craft. 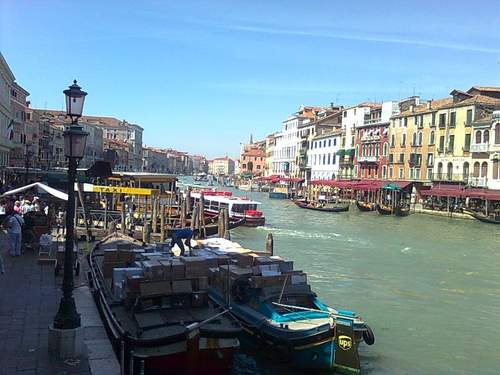 Here is a picture of the famous St Marks Square and Doge's Palace: 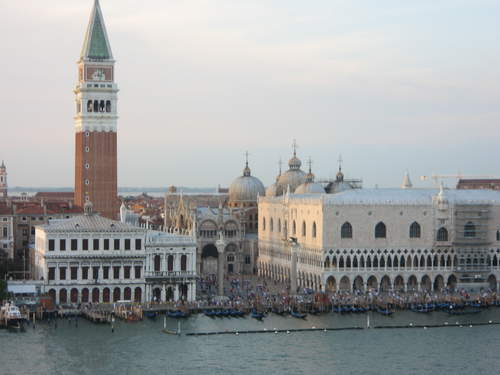 I never ever tire of visiting Venice.

This said I understand completely why the Venetians are not happy. The truth is they were unhappy many years before cruise ships started landing there. The regular tourists arriving via plane and train had already turned Venice into a hugely commercial place in many parts and resulted in native Venetians moving out.

Now only 1 in every 10 residents are actually Venetians.

I personally find that very regrettable but it is the case the world over that the most beautiful places become tourist attractions and thus become commercial with more shops, bars and restaurants. Tourism feeds the local economy but those who don't participate in that cycle of course will not benefit from it.

The cruise ship berths in Venice were enhanced a few years ago. They can now very comfortably hold 6 cruise ships in that berthing area which is located at the back of Venice.

The local authorities, bowing to Venetian public pressure, have already stopped the larger cruise ships from entering from the direction of St Marks. The smaller ships such as the 1500 passenger one I am currently on, have no problems as yet.

Note however that this is jjust about the ROUTE the ship takes to get to the berthing area. The "sail in" to Venice is one of the most magical events a traveller can witness when entering a city. Entering via a cruise ship which passes St Marks Square and the Doges Palace is a sight to behold and one never forgotten.

Ultimately they will insist on ships using a different route which essentially see the ships go around the back and thus this ability for a magical sail in will be lost forever.

Venice will never imo actually stop the cruise ships from coming. It simply generates far too much money for the local authorities and for the general economy.

All they are doing is stopping ships coming in from their current route, along side St Marks.


As a regular but empathetic cruise passenger visitor to Venice I feel sorry for the Ventians and would support anything that would help them and appease their concerns.

Less frequent ship visits would be fine by me

Imposing a tourist tax would be fine by me

In the end though it's a fantastic place and a "must see" in one's lifetime.

Figure on how many millions of people flood into London every year to see the sights there. Do you think they will stop those people arriving? Nope.

Neither will they do so in Venice.

Visit Venice if you can, and by cruise ship if possible


With unprecedented access to Venice's emergency and public services, this series goes behind the 15th-century facades to experience the real, living city. From daily emergencies to street sweeping, bridge maintenance to flood defence systems and a death-defying descent across St Mark's Square, this is Venice as you've never seen it before. This is Venice 24/7.

The art world descends on Venice for the Biennale, a six-month long festival. Anish Kapoor attempts to stage his ethereal Ascension in a challenging Palladian church while another artist battles to transport a four-tonne sculpture along the canal. The Fenice theatre undergoes critical safety checks, following the devastating fire of 1996 and a 100,000-tonne cruise-liner must execute inch-perfect manoeuvres as it travels perilously close to the historic centre.
Tonight:

When the Boats Come In


For one day the canals are closed and fleets of row boats take to the water. As temperatures soar, Venetians and visitors turn out in their thousands to celebrate the ancient tradition of rowing. At the same time, the police try to rein in speeding motor boats while, on the city's outskirts, an enormous anti-flood system is being built. As the team prepares to lower millions of pounds of technology weighing over 20 tons into the Venice lagoon, nerves are mounting. Without it, Venice is at risk of disappearing under the water.
Apparently, the series was made in 2012 and there may be a new series soon.

Coincidentally (or not?), tonight Waldemar Januszczak focuses on the Rococo's descent into madness, including the mysterious masked figures of Longhi in 18th century Venice. 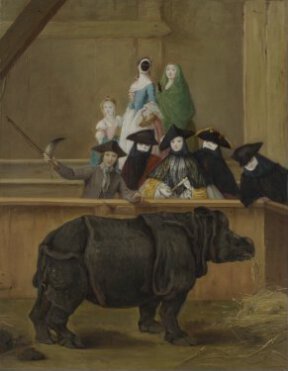 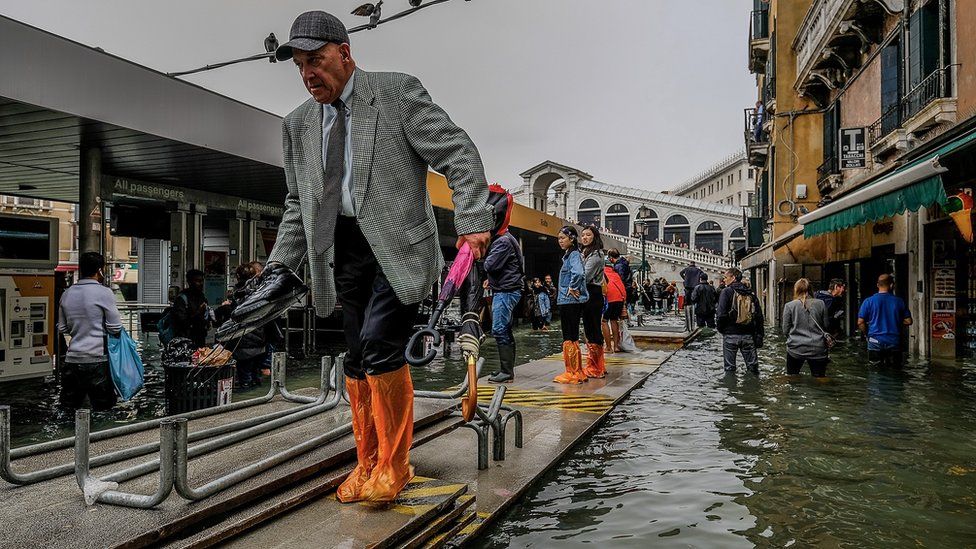 In the canal city of Venice, rising floodwaters have overwhelmed many of its famed squares and walkways, with officials saying as much as 75% of the city is now submerged.

Venice's central St Mark's Square was closed on Monday afternoon, after the water level reached "acqua alta" (high water) of 156cm (5.1ft). It is the fourth highest level ever recorded.

And yet, many people - tourist and locals alike - appeared determined to forge ahead with business as usual.

Meteorologists are warning that the bad weather will continue.
Can't blame the tourists for the weather .....