Italy's budget for 2019 has a clause enabling Venice to impose the fee, which will especially target day-trippers arriving on cruise ships.

Venetians have long complained that mass tourism is swamping the city, adored for its picturesque canals.

Hundreds of cruise ships moor in Venice every year, allowing over a million passengers to see the city's sights.

It is expected to be set at 2.50 to 5 per person, but at peak times in the summer it could rise to 10. Venice plans to have the tax in place for the 2019 high season.

It will apply only to tourists, but it is not clear whether it will replace a city tax already levied on hotel occupants. That tax brings in about 30m annually, but the "landing tax" could generate more - an estimated 50m.
Seems fair enough .....

Venice is a fascinating city and a wonderful place to visit, but I do feel sorry for the people who live there

When I went, back in the 70's, it was busy & prices were high but the people who live there have to make a living

I do believe that Venice has a limited life and, just like all the other beautiful places on earth, we are destroying it

I really hope that we are soon able to produce videos, with all the sites, smells & sounds, so people can still see it's unique beauty after it has gone.

The charge seems fair to me and I hope the money is used towards the preservation of the place. It is the cruise ships that are destroying Venice, along with lots of other places in the World.

It would be ironic if that `entry fee` killed of tourism altogether thus starving Venice and its inhabitants of much needed income.

Originally Posted by Judd ->
It would be ironic if that `entry fee` killed of tourism altogether thus starving Venice and its inhabitants of much needed income.
That'll never happen .....

There are lots of restrictions/charges for tourists and they haven't stopped the flood:


The city recently announced controversial plans for a ban on sitting or lying on the ground.

If that goes ahead, tourists could reportedly face fines of anywhere from 50 to 500 for sitting on an unauthorised surface.

A ban on sitting down is already enforced at the most crowded tourist spots, with officials moving those who rest on the steps in St Mark's square - with potential fines of 200.

Other fines for tourists who do not "respect" Venice include: 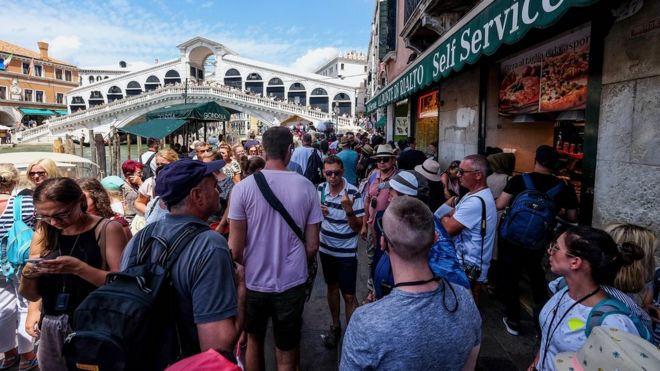 I have no issue with paying a tourist tax to enter Venice, in fact it is a potentially great idea.

It comes with the typical problem though. Who will actually get the money? Where will it go?

Venice purposely developed a huge new berthing area in recent years to accommodate more ships and to keep them around the back of Venice rather than around the primary areas near St Marks. It can take at least 6 large ships, maybe more. Those ships arrive just about every single day from a wide variety of cruise lines.

It's clear then that Venice is creaming in many £millions alone just in ship berthing fees but just WHO is getting that money?

Clearly it is not the Venetian people, and that's the problem. This is just more corporatism. The few getting wealthy at the expense of the many.

I fear that any Tourist Tax is going to go the same way. With the average cruise ship bringing say 2500 passengers and there being say an average of 4 ships in port every day then with a tax of £10 a person, that's a luvly jubbly £100,000 in tourist tax EVERY DAY they will make.

Somehow I can't see that money finding its way to the real people. The lion's share will surely be creamed off by authorities and government.

Already the vast majority of real Venetians have had to move out of Venice, which is pretty sad. I'd be very supportive of anything that would restore the balance but I have little faith in authorities to put the money where it is needed.


A cruise ship has crashed into a dock in Venice, hitting a smaller vessel.

The MSC Opera, its horns blaring, ploughed into a wharf in San Basilio-Zattere.

No major injuries have been reported.
Not exactly a catastrophe of Costa Concordia proportions but scary nevertheless .....

Never fell the desire to visit Venice .
I can just go and look at a Canaletto painting and see most of it .

Just watched a vid clip taken full on and though most people on land were running away, I couldn’t believe those who stopped to film it!!!

I have visited Venice once, done the gondola ride.

Although I liked what I saw at the time, it's not a place I would go out of my way to visit again.