Anyway the story goes she ordered a chicken fillet sandwich without Mayonaise from a KFC when she got it she thought they had put Mayonaise on by mistake but it didn't taste like Mayonaise....on closer inspection it turned out to be a sack of puss leaking out of the chicken......I've never been in a KFC since hearing that....I feel ill just typing this. Yuk!!

KFC stuff their chickens with cats ??!!

We have the occasional Big Mac, nothing wrong with that if only occasionally, its the parents who regularly feed their kids them and other stuff that , for them , is the easy option, we had a kfc whilst on holiday and, it was very nice, theres plenty of horror stories Im sure, but, I generally take them with a pinch, ( a small pinch mind you) of salt, havent been to Burger King for ages, and it looks like I wont be going anytime soon either, as ours burnt down last week.
swimfeeders
Chatterbox

All meat is contaminated with bacteria.

It is most commonly contaminated on the surface of the meat.

You can safely have a rare steak, it is seared on the outside and the heat kills the bacteria.

With a burger, of whatever meat, it is minced and formed so the bacteria on the outside is now throughout the burger and not cooking the middle at a high temperature will mean a much higher risk of food poisoning.

Originally Posted by Bruce ->
Perhaps that is why your puss filled chicken is unsaleable Cobber?

BSE for chickens?
Surely be now you have realised that there will always be an odd case of the unuasual in pretty much everything, from a "Friday" car to plagues of mice?
As Confucious probably said:"sh 1t happens".

I have never personally had or even seen any chicken in the UK which could even remotely be described as "puss-filled" or even "unsaleable" Bruce, and the vast majority of consumers here are undoubtedly experiencing the same which is hardly surprising when our chicken is widely recognized as having amongst the highest hygiene and biosecurity standards in the world.

So you stick with your Aussie chlorine-washed muck if you want to cobber but we don't want it.
And don't try to make out that our chicken is somehow of a lower standard than Aussie stuff, because it isn't.

I know why a hamburger is so-called but IMHO it's not terminology we use very much.
Regardless, they're not something that we as a family eat very often ............... more at this time of year when the barbecue is in use than otherwise maybe, but there are still other things we'd rather barbecue too than a burger.

I just thought I'd add that "hamburger" brings to mind those ruddy gawdawful tinned things in gravy that were for some baffling reason quite popular many moons ago and which I see are still availabubble to buy.
These: 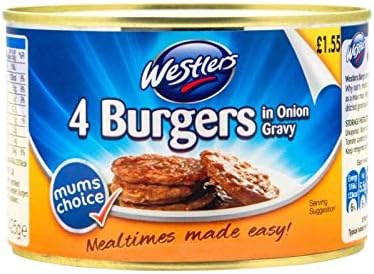