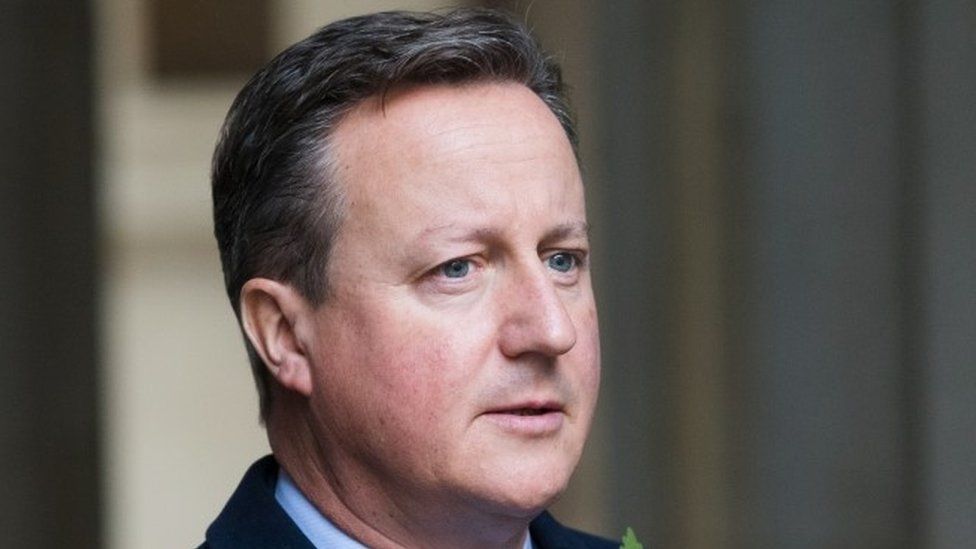 What did David Cameron do?


The man behind Greensill Capital - Lex Greensill - worked as an unpaid adviser to David Cameron when he was prime minister, and developed a policy designed to ensure small firms got their bills paid faster. The scheme also benefited Mr Greensill's company.

Mr Cameron went on to work for Greensill Capital after leaving office, and tried unsuccessfully to lobby the government to increase the firm's access to government-backed loans. He pressed Treasury ministers - including sending Chancellor Rishi Sunak text messages - for emergency funding for the company, in which the former prime minister had a financial interest. David Cameron and Lex Greensill also met Health Secretary Matt Hancock for a "private drink" in 2019 to discuss a new payment scheme for NHS staff.

Mr Cameron is reported to have told friends he was set to earn as much as £60m from shares in Greensill, where he had worked since 2018.

In the end, Mr Cameron's pleas to the Treasury for emergency loans for Greensill Capital were not successful. The firm has now gone bust, throwing the future of thousands of workers at Liberty Steel, a company backed by the finance firm, into doubt.

Mr Cameron didn't appear to do anything wrong, under the current rules. He stood down as prime minister in July 2016 and joined Greensill in August 2018.

Although Mr Cameron has been cleared by a watchdog of breaking lobbying registration rules, a Sunday Times investigation has shed new light on his dealings with Mr Greensill when he was prime minister, in the early days of the Conservative/Lib Dem coalition.

In 2012, Mr Greensill was made an unpaid adviser in Mr Cameron's government, with a Westminster pass and access to government departments. He used this access to promote a government-backed loan scheme he had devised. Mr Greensill stood to make a lot of money from the scheme. He helped to convince the UK government to set up a supply chain finance scheme for pharmacies - paying them early for money they were owed by the NHS. In 2018, Greensill Capital won the contract to run it.

Questions had been asked before about the sustainability of Greensill's business since at least 2018. But the final blow came last July, when one of its insurance companies withdrew cover that protected some of Greensill's investors.


The relationship between those at the top of government and big business has never been under more scrutiny, following questions over the way Covid contracts were awarded. Critics argue that it is too easy for ministers and top civil servants to use their inside knowledge of Westminster to enrich themselves when they leave government.
There is also a question of access. There are thousands of lobbyists - from trade unions to environmental groups to multinational companies - why do some people appear to get favoured treatment?

The government says the review, which will report back by to PM Boris Johnson by the end of June, will examine the awarding of contracts for supply chain finance. Downing Street says it will look at "how contracts were secured and how business representatives engaged with government".
That's marginal cronyism become full-blown but there's another element to the "conspiracy":


Bill Crothers, who had already left his job as chief procurement officer but remained a Civil Service employee, joined financial firm Greensill Capital in September 2015 as an adviser while still working for the government. The part-time appointment had even been "agreed" to by the Cabinet Office, the Office of the Advisory Committee on Business Appointments adds.
So far, no illegality is claimed but several people, including Cameron, made millions of pounds by keeping government contracts "exclusive" .....


As expected, the lobbying row dominated most of PMQs:

Cronyism was rife in the Labour Party and the Lib Dems too. Look at the jobs Blair, Brown and Clegg got when they left office.

Try and be a bit more balanced, Omah, you sound like a heretic.

Cameron and Sunak set to give evidence to Greensill probes


The House of Commons Treasury select committee on Wednesday launched an inquiry into lessons from Greensill, the supply-chain finance group that collapsed last month, and Sunak is expected to appear before it.

Cameron is likely to give evidence to the Commons public accounts committee, or the public administration and constitutional affairs committee.

The moves by these committees to pursue hearings into the Greensill scandal came after the Conservatives used their majority in the Commons to reject Labours call for a special parliamentary investigation.

Meanwhile, Simon Case, head of the civil service, wrote to senior officials to request full disclosure of their outside interests. On Tuesday it transpired that Bill Crothers, former head of government procurement, took on a role as a part-time adviser to Greensill in 2015 while still a senior civil servant.

The Greensill affair has fuelled calls for sweeping reform of the rules governing when former ministers and civil servants can take on private sector jobs.

Boris Johnson, prime minister, has ordered an inquiry into Greensill and supply-chain finance that will be led by lawyer Nigel Boardman and held in private. But Labour proposed that a special select committee probe the affair through public hearings. MPs rejected Labours plan by 357 votes to 262.

Labour leader Sir Keir Starmer accused Johnson of failing to tackle sleaze at the heart of government. He said there was an open door between the Conservative government and paid lobbyists, adding the whole broken system now needed to be overhauled.


The Greensill scandal is just the tip of the iceberg  dodgy contracts, privileged access, jobs for their mates  this is the return of Tory sleaze, added Starmer.
Indeed, Sir Keir .....

There's something very nasty about Westminster and has been for some time, and in all parties AND the civil service too.

The whole lot is rotten to the core of at the VERY least questionable.

Mr Cameron is reported to have told friends he was set to earn as much as £60m from shares in Greensill
What are friends for!
swimfeeders
Chatterbox

Hopefully this scandal will result in new procedures for both Politicians and Senior Civil Servants.

It is about time it was stopped completely.

Lower down the scale, everything has to be declared, even down to being a member of fishing clubs and your partner having a couple of antique cabinets in an Antiques Centre.

One law for those at the top and another for the plebs.

The only good thing about this is they are no longer in government. Obviously nothing will change, lengthy inquiries never seem to result in all recommendations being implemented.

Slap on the wrist for Cameron. Remember the tax haven Panama Papers.

Originally Posted by d00d ->
What are friends for!
That's what shares are for, friends in the know about what to shares to buy and when to sell a definite advantage.
Donkeyman
Chatterbox

Originally Posted by Cinderella ->
That's what shares are for, friends in the know about what to shares to buy and when to sell a definite advantage.
Yes, another form of insider trading imo !!