The British Army claims they see the potential that the rest of society does not in their new recruiting campaign: 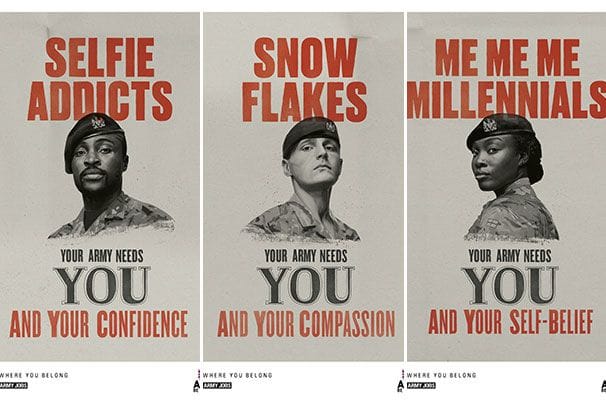 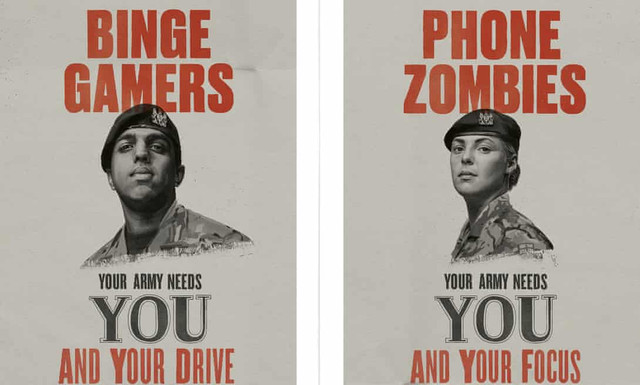 Makes you proud to be British... I despair I really do...

Is there no longer a place for pure and simple megalomaniacs?

Crap pay, crap housing and being hung out to dry when things go wrong.

Being sent abroad to fight in things that do not concern us, like regime change.

I am not surprised that many no longer consider entering the Armed Forces.

Yes a sign of the times that the armed forces are going soft.
Back in the day you had to be a hard basteward or a nutter (I was the latter) to last in the forces now you can be a mammy's boy to put it politely.
I did my training at Strensall just outside of York.
Patrolling an armoury on the moors at night with a baseball bat wtf was that all about. My penalty for telling a officer where to shove it.
Driving to a rail siding just outside of York and unloading a goods wagon (no security) which was full of ammo.
In the days when the IRA would have saw that as a opportunity to stock up.
10 mile jogs daily in vest and plimsolls and shorts in the snow on the moors.Getting back to barracks and putting on full combat gear with pack and SLR and going back out and crawling on our bellies on the moors for what seemed like miles. Spending 2 weeks of hell at the end in battle camp at Otterburn in Northumberland with about 4 feet of snow all around.
So much more enjoyment all for £11 10 shillings a week full board and lodge of course.
My son joined the Army when he was 19 lasted 8 weeks did his tendon in apparently whilst on a run. So he gave it up.

I have a very close friend his son not really the brightest in the light area as just left Sandhurst . He's gonna be a officer so his dad tells me (I smile quietly) yes his start salary is £38000 before he as even decided on what regiment he is going in so his dad says, and then rising considerably once he is in a regiment.
He actually wants to join the Para's then the other mob no one speaks about.
Fair do's to the kid he is a black belt in Karate and is built like a brick *hithouse.
Astonishing when you think he was always ill and such a weedy kid.
Climbs the mountains that we have in the UK Ben Nevis, Scafell Pike and such. I smile again after listening to what he plans to achieve and then I look at the salary and think oh my god that is high.
But then again they do risk their lives for others so why not.
I really do hope he achieves his goals.
Like I say he may not be that intelligent but what he lacks in that department, he as boat loads of physical strength and commitment.
Perfect for a foot soldier but an officer I am not quite sure about.
But then again he as been surprising me all his life and I love him like my own.

Originally Posted by susan m ->
Bring back conscription.
Totally agree Susan and that should be in all forces not just the armed.
They should be allowed to conscript into say Police Force,Fire Brigade,Ambulance services like a few other countries do.

Also I feel that when finished their service if they do decide to sign up for longer they should be given the opportunity to be teachers,much like they already train to be mechanics and other trades in the forces.

It really should be looked into again with the Government investing more money into rebuilding this country for the better through Conscription.

Not just looking desperate - they are desperate, since the (privatised) recruitment company failed dismally to attract sufficient number of volunteers over the past couple of years and the army made so many redundant five years ago and cut the number of soldiers needed - stupid barstewards!!!

Interesting film from Manpower Group UK. Years back the Australian Government realised they were going to be very short of defence forces if things stayed as they were. They raised the pay massively, encouraged women and the raised entry requirements so it was actually much harder to get in.

They also put recruitment in the hands of a private agency.

BTW Australian defence forces were always paid well, I remember my Grandfather saying something about American troops to the effect, "...over paid and over here". It was something of a shock to discover that Australian troops even in WWII were better paid than the Yanks.

That is the way to get a defence force to be proud of - pay them well and have high entry standards.