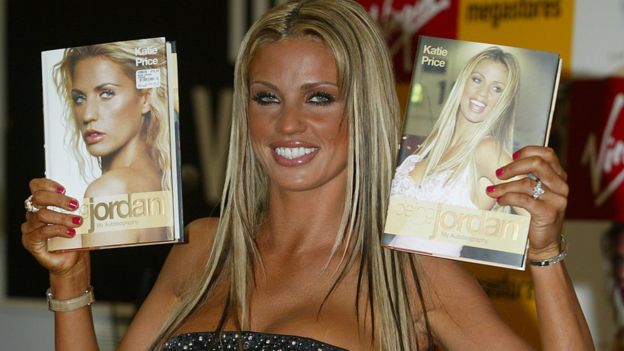 Katie Price has been declared bankrupt in a hearing at the High Court, which was told she had failed to stick to a plan to repay her debts. The former model and reality TV star was not present at the London hearing.

Last year, Price, 41, came to an arrangement with her creditors for a repayment plan known as an Individual Voluntary Arrangement (IVA). But the insolvency practitioner overseeing her IVA said she had failed to keep to the terms of the agreement.

Now that she's been made bankrupt, the Official Receiver will take control of her financial affairs and property.
I've never liked Katie Price but her relentless, and succesful, pursuit of wealth and her obsession with cosmetic surgery coupled with an equal obsession for younger men has been oddly fascinating over the years.

I do recall that, at one time, she "wrote" a new autobiography every year to sell to gullible schoolgirls, along with a vast array of pink accessories for horse and home, bringing her wealth up to £80m.

By now, she should have been able to live luxuriously on the interest but, seemingly, her cash has been squandered and her assets will be sold to pay off her debts.

It begs the question on how can anyone blow forty million quid?

Originally Posted by Judd ->
It begs the question on how can anyone blow forty million quid?
Quite easily it would seem!

I used to watch that programme with her and Peter Andre and they were always buying unnecessary cars and houses.

It's a shame not because of the money but because she was quite attractive when she started and all the operations and cosmetic changes have ruined her looks. She keeps having more surgery and treatments to try to fix it but they just make it worse.

How do you spend that much money?

Originally Posted by Judd ->
It begs the question on how can anyone blow forty million quid?
A girl would have to do a lot of blowing to even get 40 million quid!

Originally Posted by Judd ->
It begs the question on how can anyone blow forty million quid?
I'd have a blast finding out.